Fun fact: today is the 4th anniversary of my remission from AML.

I wish I had written this update around graduation, because it really was beautiful. A week later, my leg broke and since then things have been pretty hard. Fortunately, I wrote an article about graduating for St. Baldrick’s, so I’ll let that stand in for now.  I’m really happy with the way this article came out, so honestly if you’re only going to read one thing I write today, that’s probably the better route than this blog post. Here is the article: Brooke Survives Cancer, Graduates Stanford – But Not Without A Lifetime’s Worth of Challenges

After graduation, I spent a week as a volunteer counselor at Camp Kesem, which is a camp for children whose parents have/had cancer. It was one of the most magical weeks of my life – they tell you about the magic before you go, but you have to see it to really get it. I worked with 13-14 year olds, and they were an amazing bunch. I wish I could tell you more about each one of them. I was amazed that I was able to keep up pretty well. I walked the huge hill to the wood cabins we slept in multiple times per day. I played games with the kids, and I felt like I was mostly not able to keep up because I am old and they are young (I know I can’t really use this excuse yet at 23 but I’m going to anyway). I was “on” pretty much non-stop from 7 AM – 11 PM, and I really actually did that for a whole week. On the last day, as we got into the busses to go back to Stanford, I felt an overwhelming sense of love and peace. I had made it through the whole week, but I’d done more than just make it – I felt like I actually did a good job. And there are no words for the amazing memories created with my co-counselors and, most importantly, the kids. (By the way, this camp is completely free and if you want to donate, you can go here: Kesem Fundraiser)

Here’s a picture of my unit!

I never knew I could love a group of kids so much in so little time. Thank you @campkesemstanford for giving me the opportunity to be part of something so magical ✨ #ownit

On Thursday of my week at Kesem, my right leg started to hurt. I assumed it was a strain from being so active and figured it would go away after I got back and rested. It didn’t. I started back at the lab I’ve been doing research in for what was supposed to be a full-time summer position. My leg hurt constantly. I ignored it because I had things I needed to get done – the thing is, despite “graduating” I actually still have to turn in my honors thesis. I wanted so badly to walk across that stage being actually finished, but at least I am close (this is a really common thing to do at Stanford). Anyway, aside from the thesis I also just wanted to do more research and have unencumbered time to focus on it. So, I ignored my leg. But it was getting worse, not better. Finally, after about 3 weeks, I got an MRI. You guys… my femur was broken. I was walking on a broken FEMUR.

To be more specific, my femoral head is cracked. But even worse than the crack is what likely caused it: avascular necrosis of my hip joint (AVN). AVN is death (necrosis) of a joint due to lack of blood supply (avascular). This is a very common side effect of prednisone, which makes blood more viscous which results in it not perfusing as well to joints. I have known for a long time that this was a likely eventuality, and it’s actually surprising that I made it 4 years before this happened. But wow, it hurts.

I had to take a leave from my lab because I can’t really walk. I am in pain most of the time, but it comes and goes so I do have times where I feel okay. I can’t do hardly anything that involves walking, which is pretty much….everything.  Daily tasks are so. hard. Walking to the kitchen, cooking, sleeping, really standing up for any reason. It is really disheartening. I had so many hopes for this summer, and my leg being broken has really gotten to me. I am really just depressed about it. I am also struggling because no one seems compelled to do much of anything about it. Basically, I’m supposed to rest and wait and do some physical therapy. Most people with AVN eventually do get a hip replacement. To be honest, I don’t totally understand the delay on surgery. While I know it’s a major surgery, it is inevitable so it seems ridiculous to spend months (or years) in pain and unable to do anything that involves walking. I don’t have a good grasp of what the future is with my hip/leg. I wake myself up at night screaming because it hurts so badly. All I know is that I’m really frustrated and it’s already been almost 3 months since this injury occurred and I see no improvement. I tried to get a second opinion at Stanford but I couldn’t get an appointment until October (I called in early August). They didn’t seem to care that my femur is broken and I’m in a lot of pain. October it is.

The MRI for my femur also showed a mass on my cervix. We weren’t checkin my cervix or anything with the MRI, but it happened to be picked up. The two options were basically GVHD or cervical cancer. Even though I knew GVHD was more likely, I still worried about cervical cancer. Fortunately, after getting it checked out it I was told it is most likely GVHD. I still need to get surgery to remove it, but no one would operate on me due to the complexity of my case. So, I have to wait until October, when apparently a new OBGYN is starting at Stanford who focuses on GVHD. It is so tiring to wait so long for really important medical procedures. I am just sitting here for months anticipating this surgery (and probably also a surgery on my hip/leg eventually).

I am worn out. I can feel it in every cell in my body. I don’t want to push through the pain to live my life. I don’t want to be a good sport. I don’t want to take care of myself and my apartment and my bills and my thesis and health insurance and everything else that being alive with a chronic illness requires. I am doing a poor job of all of it, and I also don’t really care that I am.

I guess I’ll share some good news now: I am off of prednisone as of early July. It’s been almost 2 months off of it. I can see my face slowly returning to normal – hopefully in another month or two I’ll be fully there. My skin (and all my GVHD) continues to improve, though I definitely still have a lot of it. I have also tapered the daily IL2 injection from 7 days/week to 5 and now I’m on 3 days/week. I should be off of it in the next few weeks. That leaves only imatinib to treat my GVHD, which is amazing. When the scleroderma started, I was on 60-80 mg of prednisone, 2x weekly photopheresis, daily IL2, and imatinib. Even with these improvements, I have small panic attacks almost daily about how trapped I feel in this horrible body. The scleroderma is so dehumanizing and even though it is better than before, it is still very significant and I feel nowhere near normal or even human. It’s been two years since the scleroderma started.

In other good news, I also got THREE VACCINES. This is one of the things I have hoped and wished for most since my transplant. My immune system can only handle dead vaccines right now, so I have to wait on live vaccines, which includes MMR. With measles returning due to anti-vaxers, this is terrifying (vaccinate yourselves and your children please. I and many others rely on herd immunity to survive). Unfortunately, there is nothing I can do but wait and hope I am not killed by a vaccine-preventable illness.

I can somewhat see a light of being off of immune suppression, which would allow my immune system to actually strengthen to normal (or near normal). That would mean I could stop taking a lot of other medications I am on due to my weak immune system (antivirals, antifungals, antibiotics, etc.) However, I did get off of immune suppression once before, in January 2017, and that only lasted about 3 months before I had to go back on. So I’m not quite celebrating yet.

Lately I have started to fear my future a lot more. That is probably because a future seems more realistic, but also because 4 years of endless health issues is really weighing on me (obviously). It was cancer then acute GVHD then chronic GVHD then kidney failure and now I still have chronic GVHD (albeit less) and my leg is broken and I have AVN in my hip. I don’t have hair. I am so tired. I am so sad. I wish I had control of my life. I wish I could travel and feel like myself and work full time and do all of the other things I would have had if I hadn’t gotten sick. Or even if I had gotten sick but not so sick. I am too tired to have AVN and a broken leg and to need multiple surgeries, but it doesn’t matter if I’m tired. It is what it is, whether I like it or not.

It is childhood cancer awareness month – more on that later.

Here is a picture of me and my friend, who I met the summer after 9th grade at science camp (yes, science camp): 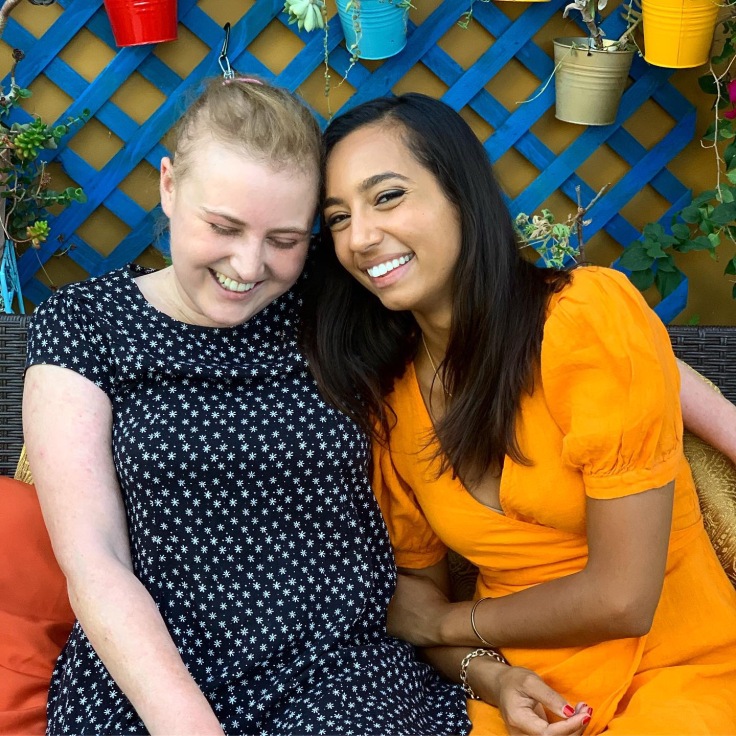 2 thoughts on “I graduated and broke my leg”